Police CPI, which works alongside the Police Service around the UK to deter and reduce crime, are signatories of the Women’s Night Safety Charter, which seeks to make the capital a safe place where women feel ‘confident and welcome’ at night.

The Women's Night Safety Charter is part of the Mayor’s Tackling Violence Against Women and Girls Strategy and is London’s commitment to the UN Women Safe Cities and Safe Public Spaces global initiative.

It sets out guidance for venues, operators, charities, councils and businesses to improve safety at night for women, including better training of staff, encouraging and reporting of harassment and ensuring public spaces are safe. 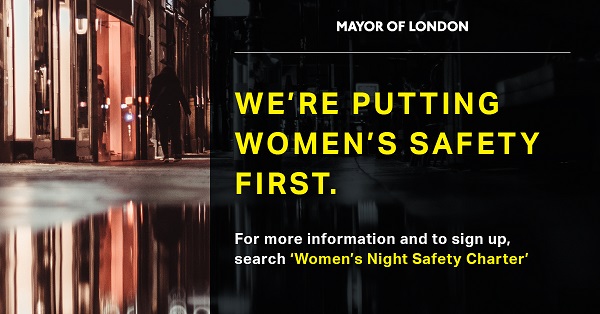 To support the Women's Night Safety Charter, any organisations that operates at night can sign-up to its simple pledges:

The Mayor has also invested over £100,000 to develop new training, resources and best practice sharing events to help signatories make progress on meeting the pledges.

Police CPI Chief Operating Officer, Jon Cole, said: “The Charter has attracted hundreds of signatories from businesses and organisations operating across London ranging from pubs and clubs to police and local authorities.

“As a police-owned organisation, whose primary role is crime prevention, we are proud to become a signatory of the Women’s Night Safety Charter and play an active part in supporting measures that make women safer. We will continue to promote awareness of the Charter, encouraging businesses and organisations to pledge their support.”

Developed at the request of the Home Office, completion of the self-assessment can lead to Accreditation and an Award with a Star-Rating for display to show the efforts undertaken to enhance safety and security.

Licensing SAVI covers critical issues like responsible drinking, drugs misuse, violent behaviour and safeguarding vulnerable customers through to preventing opportunist theft and improving physical security, such as lighting and CCTV.  It also covers drink spiking, an issue which has hit national headlines recently with a number of victims from around the country reporting being assaulted with needles.

Licensing SAVI’s Business Manager Mark Morgan, a former Police Superintendent, said: “We know from the Women’s Night Safety Charter toolkit that night-time venues, such as pubs, bars and clubs can attract a range of unacceptable behaviours. Licensing SAVI provides a practical way to train and develop staff around the critical issues of safety and security whilst raising awareness of types of vulnerability and how to mitigate them.”